Remember me? I’m that chick that started a mummy blog with the intention of writing weekly updates and then forgot all about it. Life has been a tad busy with two little ones 18 months apart. We have also relocated to a coastal town while we renovate our tiny house in Melbourne and I just finished my first semester back at uni since popping out cherub number 2 (fist pump).

The other day I was reading yet another article about how mundane and boring it is when people update their social media accounts with info on their kids. This is an absolute bugbear of mine. You see I am a total unapologetic oversharent. Just this week I posted a pic of my two-year-old riding my 10-month-old like a horse along with an anecdote about how hard it is to convince a picky toddler that a spinach arancini ball is a cookie.

I only have five weeks left before rejoining the corporate world and I am embracing every babycino chocolate moustache, every tentative step as my bubba learns to walk and every cuddle on the couch. Because frankly my dear, I don’t give an exploding baby shit if it bores you. It’s my life in all of its glorious mediocrity and if you’re a friend of mine, it should make you smile rather than roll you eyes and grunt.

So why do I overshare(nt)? Well I’ve thought a lot about that lately. Sometimes being a stay at home mum can feel like you’re living on a remote island with two uncooperative Energiser bunnies who gurgle, scream and spew in the place of conversation. Posting on social media feels like I’m sending a message in a bottle across the sea except that someone actually reads it in real-time and more than often responds. Ok, so it’s nothing like a message in a bottle, I may have been going a bit far with the island anecdote there. But it’s about feeling connected to the world in an age when the phone very rarely rings unless it’s a Namibian asking for my bank details and passport number. The days can feel long and lonely and when you’re investing all your time in two little beings it’s kinda hard not to make them the focus of your life’s commentary. Also living in a town affectionately known as “God’s waiting room” due to the 95yo average resident age doesn’t do wonders for the social life.

As an immigrant with family all over the world, oversharenting also offers a shortcut in keeping the ones that care updated. Believe it or not, not everyone has WhatsApp and I can’t be farked sending personalised emails to 58 relatives. I have a screaming baby to breastfeed and three episodes of Australia’s Next Top Model to catch up on (P.S. I reckon it’s a close one between Izi and the redhead).

Another reason I oversharent – I am crazy, madly proud of my little men. They are delicious, enlightening little dudes and every day I am astounded at the scrumptiousness that Lach and I managed to make. Sure they are no better than anyone else’s kids, they are probably just awesomely average but they are mine and I love them more than salted caramel cronuts.

This time in my life isn’t going to last forever, one day I am sure I will get back to the gym and develop an intense passion for protein balls. Until then, I am committed to boring the bejeezus out of anyone who will let me. Viva la oversharenting! 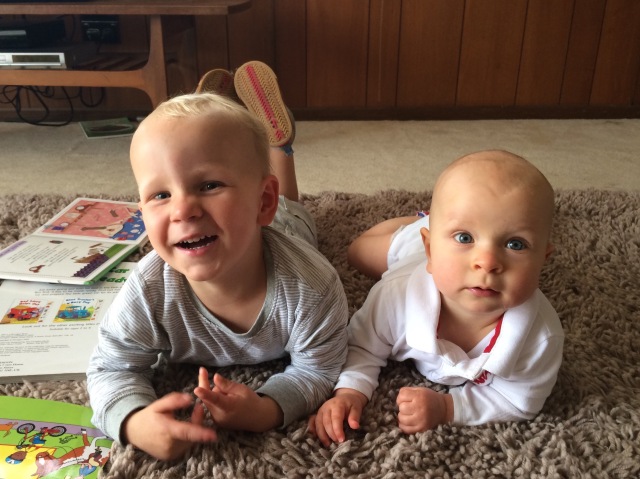