So my whole venture into the blogosphere seemed to fizzle when I went back to work part-time. Apologies to all my loyal followers (Dad, Mum, Rach). Now that I’m back on maternity leave, I’d like to give it another crack! So here goes.

I’d like to start this post with a public service announcement: for those of you who think breastfeeding is a contraceptive, it is not. When Moo was only 9 months old, I found myself staring in disbelief at two little pink lines and thinking, WTF? After my initial confusion about potentially giving birth to ‘Jesus the Sequel’, I remembered a rare night out when my in-laws were babysitting and anyway…TMI (sorry Dad).

On 29 July I welcomed our second little cherub into the world – a boy named Hugo (or Hugh/Hughie/Night Owl as we like to call him). After a very difficult pregnancy with crippling pelvic instability, I was overjoyed when the anaesthetist jabbed my spine and Hugo popped out of the sunroof 15 minutes later at a whopping 4.19kgs.

Once again my daily calorie intake while up the duff equated to that of a pre-menstrual hippo, so I am now three buckets of ice-cream away from being able to apply for The Biggest Loser and my BMI is in the “consider gastric bypass surgery” zone. But on the positive side, I have a scrumptious little bub to snuggle and he is rather fond of burrowing into my fat rolls.

Hugo was 10 weeks old yesterday and I am still zoned out in the fog that is early parenthood. Last night he woke at 10.30pm and decided to stay awake for the rest of the night. After the early months with Moo, Lach and I were prepared for the worst so I think I’m coping better with the sleep deprivation this time around. Yes, I still lose my shit at 2am, I forget passwords and find clothes in the dishwasher and peanut butter in the laundry basket, but knowing what I was in for makes it less of a shock to the system.

Even though I look like a 50-year-old bag lady with a dead metabolism and a lazy eye, I am trying to enjoy the early months with Hugo as much as possible. We’ve decided that there won’t be another little McCallum erupting from Mt Uterus so I’ve tried to savour every snuggle and not stress about what we SHOULD be doing too much. Hugo has pretty much lived on my chest for the last 10 weeks and we’ve done everything wrong according to all the ‘baby whisperers’ out there. I’ve rocked him to sleep, breastfed on demand (sometimes every hour) and popped him in our bed in the early hours of most mornings. With Moo I constantly compared my parenting to others and kept worrying about doing the wrong thing and falling into bad habits. I watched the clock and logged every breastfeed and drove myself crazy wondering why everyone else’s 8-week-old seemed to be sleeping through the night while Moo was up 4,5,6 times. My ‘anything goes’ approach with Hugo will soon give way to more structure I’m sure (it’s in my nature) but for now I’m enjoying just going with the flow and he seems to be finding his own familiar patterns without any coaxing.

Moo has adapted relatively well to being a big brother. He struggled when Lach went back to work after 4 weeks off and would throw jealousy-induced temper tantrums that could rival Honey Boo Boo but he has slowly adjusted to having to share my lap with more than the dog and a packet of Tim Tams. At 20 months old, he is turning out to be quite the comedian. If Hugo sleeps too long he brings the power cord over to plug him in. He also loves to dance, decorate the dog in bolognese sauce and escape via the doggy door to embark on backyard adventures that often involve putting the laundry basket on his head and walking into the fence…

Juggling two under two is tough. When they are both screaming at the same time, I wish I was an octopus. But when I have a tough day I remind myself that “this too shall pass” and try to surrender to the glorious exhausting chaos. 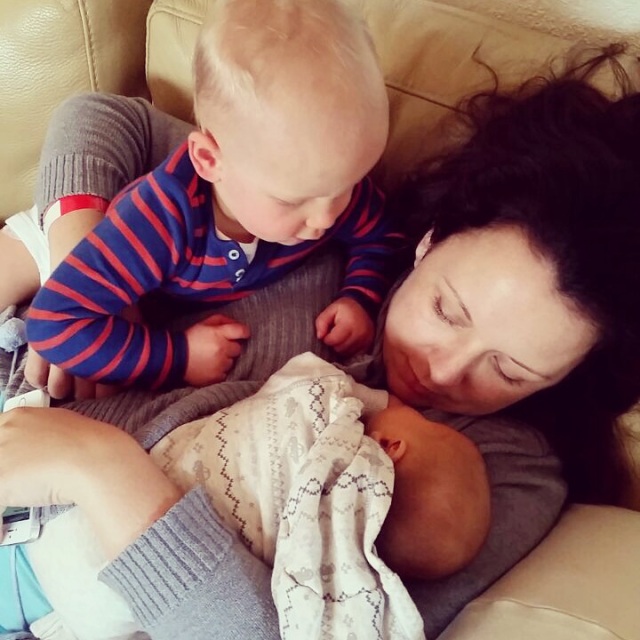 2 thoughts on “Moo + Hugh: Becoming a Mum of two under two”