Finding the remote in the freezer, soap in the fridge and the car keys in the oven… all in a days work for an expectant mum suffering pregnancy-induced brain fog

“My car is broken!” I screamed down the phone at Gary, one of Toyota’s Service Department employees. “And I have an appointment at the spa in 15 minutes!”

“Now just take a deep breath and let’s talk through this,” said a calm and sympathetic Gary, “What happens when you turn the key?”

“Right, ok, do you have your foot on the clutch?”

“Ok, a manual won’t start unless you have your foot on the clutch.”

“Ok, ok, now put your foot on the clutch and turn the key. Is the car starting now?”

The day I forgot how to drive was the day I began to believe in pregnancy brain, also referred to as ‘pregnesia’, ‘momnesia’, ‘placenta brain’ and ‘I-think-I-am-losing-my-mind syndrome’. Urban Dictionary describes it as “confusion and short term memory loss that happens during pregnancy” offering the following examples of the term being used in a sentence:

“Hey placenta brain, what’s the soap doing in the fridge?”

“My wife is such a placenta brain. Yesterday I caught her eating chalk. She said she needed the calcium.”

While I have yet to feature on My Strange Addiction chomping on chalk, my lapses in brain function didn’t stop at Clutchgate. During my pregnancy, I not only forgot how to drive, I also frequently found the TV remote in the freezer, my car keys in the oven and managed to stock pile six rolls of tin foil after forgetting to throw away the post-it note on the fridge that said “buy tin foil” (and forgetting that I had in fact bought tin foil on my last five trips to the supermarket).

I’m not alone. 80% of pregnant women experience some form of impaired cognitive function during pregnancy so it’s no surprise that pregnancy discussion forums are full of hormonal women complaining about their brain capacity diminishing as their bellies expand. As if nine months of kankles, back pain and an overzealous bladder wasn’t enough.

At about 22 weeks pregnant, I remember standing at an ATM on my lunch break trying desperately to remember my PIN number. When the digits failed to come to me I waddled around the block before returning to the ATM with chafed thighs and a restored memory.

On another occasion I managed to remember my PIN but I forgot to take the money out of the ATM dispenser. I then went to lunch with the girls and ended up red-faced when the bill came as the 80 bucks I had withdrawn had apparently evaporated along with my ability to string a cohesive sentence together without punctuating it with “Um…”.

A lot of research has been done into pregnancy brain with many different theories emerging on the potential cause.

Heidi Murkoff, author of the ‘pregnancy bible’ What to Expect When You’re Expecting, blames those pesky hormones which are responsible for a plethora of other unwanted pregnancy symptoms including snoring, water retention, foot growth and farting like a tortilla-loving truck driver.

Some blame the fact that growing babies absorb a lot of Omega 3 fatty acids that are essential for brain function, others think it may be due to a lack of sleep as pregnant women try to find a horizontal position that accommodates their growing bump.

A more controversial theory is that the brain actually shrinks during pregnancy, which would make it the only part of the anatomy that doesn’t do the opposite.

Other experts are adamant that pregnant women do not have any cognitive defects and should be able to perform functions just as well as their flat-bellied contemporaries. To that, Gary and I say codswallop. 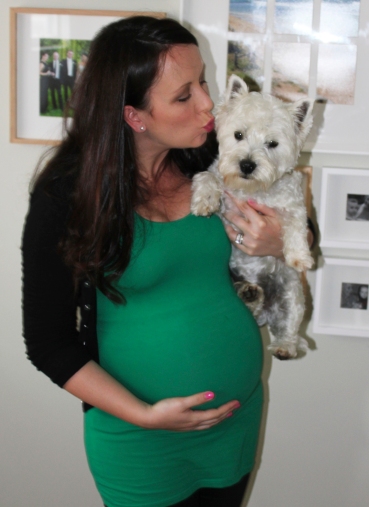 So what can be done about these bouts of cringe-worthy idiocracy?

The best thing to do is accept that pregnancy brain is as inevitable as your feet resembling 10 pork sausages sticking out of two giant burger buns. So put them up, maintain your sense of humour and try not to kill anyone.

As for me, I wish my pregnancy-related car troubles had ended when I hung up on Gary. After Clutchgate, my husband and I decided to buy a family-sized 4WD with automatic transmission (sorry environment). No clutch, perfect, right? Well…

At about 30 weeks pregnant I attended a work conference. At the end of the day, I found myself staring at a vacant car spot in disbelief. In a panic, I rang my husband and left a message on his voicemail, “The car has been stolen! Call me immediately!”

As I prepared to dial the police a faintly familiar number plate invaded my peripheral vision. My car it appeared had taken a day trip to the opposite end of the car park only to be stopped in its tracks by a ‘No Entry’ sign that it had knocked over to a 45 degree angle. I toddled over, opened the car door and realised I had forgotten to put the car in park and also failed to engage the park brake.

I texted two short words to my husband that seemed to sum it up, “Never mind.”

3 thoughts on “The perils of pregnesia”